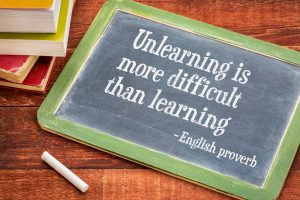 Unlearning – A key capacity for effective transitions and three steps to help you.

The concept of learning is one we are all familiar with.

We are brought up our entire lives learning new skills, knowledge and behaviours.

As children we learn every day from our parents and other authority figures.  We either take on board what we are told and tend to treat this information as ‘true’ or we learn to adapt our behaviour to survive in whatever environment we find ourselves in.

As teenagers and young adults we learn new skills and knowledge through school, college, university – some of which might adapt our previous knowledge and some of which adds to it as our brain is flooded with new information.

And then as we progress through our career we have to learn new skills and knowledge through learning on the job, or going on training courses as expectations of us change.  We are expected to pick up new behaviours or competencies advocated through organisational frameworks or ascribe to ‘values’ an organisation says are important.

Learning is important throughout our careers.

The problem is, learning is only one half of the capacity needed to successfully navigate transitions and really reach your potential.

The other half of this capacity is that of Unlearning!

So what do I mean by Unlearning?

Unlearning is the ability to recognise skills, knowledge and behaviours that may well have brought success in the past but at a certain stage start to block your ability to succeed going forwards.  Just learning more stuff won’t help – you have to recognise that the stuff that has helped you succeed is no longer working and ‘unlearn’ it.

Imagine the expert manager or specialist who has been successful through their expert knowledge in a particular subject matter area.  By ‘being the expert’ over years they may well have ‘learnt’ that ‘being the expert’ brings some form of reward; recognition, promotion, self-esteem, etc.

These rewards lead to positive emotions which help embed the behaviour as a habit so when a similar issue presents itself this person is most likely to respond in the way that has brought success before.

For the expert problem solver, when a new problem presents itself they solve the issue, gain some sort of reward, and as a result the habit or engrained behaviour becomes even stronger.

Now let’s say they get promoted and need to lead other people.  They learn new skills in delegating, feedback, coaching, and so on but inevitably find themselves defaulting to old behaviour, especially when under stress.

So, with the best of intentions some typical scenarios might play out:

Instead of motivating and leading their team they disenfranchise, demotivate and disempower.

They have learnt new stuff but haven’t ‘unlearnt’ the old habits that made them successful.  They can’t embed the new knowledge as a new behaviour and don’t fulfil their potential in the new role.

So how do you unlearn?

Among the many ways of unlearning these are my top three tips.

Recognise your own part in the issue.

Highly successful people typically haven’t failed at much in their life and as a result often haven’t really learnt how to cope with failure.  This can result in a trait called defensive reasoning which usually presents as blaming outside circumstances when things go wrong rather than looking at their own contribution to it.

When things aren’t going the way you want look at yourself first and recognise what you are contributing to the situation.  This might be through feedback, reflection, coaching or any other mechanism that helps you focus on your own actions.

Triggers are specific situations that tend to result in a predetermined behaviour, or habit.  We all react on an emotional level first.   If this emotion is one in which there is a perceived threat then our brain doesn’t engage its higher cognitive functions such as creativity, logic, rationality. It reacts and defaults to behaviours that have ‘worked’ before.

So when someone comes with an issue that might result in something going ‘wrong’, rather than think about what would be a great response we perceive the threat and react how we have reacted before.

Take time to reflect on the specific triggers that are causing you to repeat behaviours that you know are getting in the way.  Recognise the emotion, name it and develop a narrative that will allow you to disassociate from the old behaviour and re-engage the cognitive part of your brain.

Payoffs are those activities through which we anticipate a reward and as a result causes the release of dopamine in the brain which in turn pushes us even more towards that sort of behaviour.

In my experience it is best to start working on this stuff before you need it – what I call the Orientation phase.  This is the time before you step into your new role and have time to unlearn, learn and make some mistakes.

During the Onboarding phase you can carry on unlearning before Embedding any new knowledge you have learnt.

Contact us here is you want to discuss how we can help you transition you or your leader more quickly during their next promotion or email steve@stretch-p.test .

Want to get ahead? Clarify your Purpose!

How to build resilience to navigate career transitions.
Scroll to top